All sorts of things we've been wondering about and could not keep only for ourselves.

I’m a true believer that boredom is the opposite of happiness and that life cannot be enjoyed to the fullest without a little spiciness. That’s why I try to bring a little excitement (or a lot) to the taste buds of Romanians through the fusion gourmet products we call Doamne Fereste.

Doamne Fereste is all about the element of surprise – discovering something new and something that was forgotten at the same time. Mostly, it’s about the pleasure of living in the moment with intensity. That’s why Doamne Fereste is perfect for those who are not afraid of jumping into new culinary journeys.

The Name that Brings the Heat

First, let’s break down the name and what it stands for. It can have multiple meanings that fit our values perfectly. Some might say that Doamne Fereste is sort of a rebellious brand. It took courage and some freedom of expression to create the brand name because Doamne Fereste, translated in casual Romanian, refers to God in a way that doesn’t praise it.

Doamne Fereste is an idiom that says a lot about the product, which is extremely spicy; it can also refer to a saying people use when they are amazed beyond their expectations or, on the other hand, when someone wants to send away bad luck.

For those who like digging a little further, they will discover that “fereste” is also a fusion name, meaning “guardian angel”, “supernatural messenger of divinity” or “supreme protector” in both Persian and Aramaic-Babylonian cultures.

At the same time, the name reflects the element of surprise that comes from the subtle and unexpected combinations of tastes and flavors. It brings both the senses of taste and humor together.

I’ve always loved traveling and not just to the seaside or even to Paris, but much further than that. I was lucky enough to have a life partner – and the co-founder of Doamne Fereste – Ioan Dan Niculescu, who shared the same path and dream. Unfortunately, he is no longer with us because of a tragic car accident that happened in 2016. We travelled together and collected, in our hearts and in years, memories of Southeast Asia and Latin America. That’s how we came across flavors and tastes that are beyond words.

The business idea came to us right after we had returned from a three month sabbatical in Thailand, in 2011, where we discovered all kinds of delicacies. Because we missed the food there, we decided to cook it at home, trying to recreate local recipes from Thailand. Taking small steps in our own kitchen, we started experimenting out of pure curiosity for anything spicy, refined and fusion.

In the beginning, we created the first Romanian hot sauce, made from a mix of four types of extremely hot peppers from four different regions of the world (Europe, Southeast Asia, North America and India). The peppers were marinated for at least three years, using our own particular recipe.

It made such an impression, that it later became part of the biggest collection of hot sauces in the world, owned by the Vic Clinco Museum in Arizona, USA, that has over 8.000 exhibits. Since it’s difficult to produce in large quantities and far too spicy for some consumers in Romania at the moment, the hot sauce is limited edition. But it will always tell the original Doamne Fereste story.

With the success of the sauce, we decided to convince as many people to fall in love with our “spiciness”. That’s why we focused on creating the mustard, which is, in my opinion, the most beloved type of condiment in Romania. We applied the same principle as with the hot sauce – the flavor combinations came not from necessarily studying the market itself, but from observing what was missing from the picture.

We currently produce three editions of the spicy mustard cream: Hindu, Aztec and Persian. Each of them has specific ingredients mixed with a locally produced base to create the final fusion product: the Hindu surprises with traditional Indian spices, the Aztec blends a courageous cocoa and vanilla mix (inspired by the Mexican chocolate mole sauces), and the Persian gathers aromatic Iranian herbs and Sari sesame. The latter is the only mild product, perfect for the faint-hearted, but who still enjoy a kick to their mustard.

From the outside, it might look like a fantastic journey, counting success after success. But getting fresh ingredients, without preservatives and colorants from opposite ends of the world is no easy task. Any new edition has to spend a lot of time in our little laboratory, because flavors mix much better after a few months together. And for a boutique producer, it’s difficult to find the right distributors. But the encouragement comes when we read excited messages from people who open their first jar of Doamne Fereste and consume it with an almost ritualistic practice. 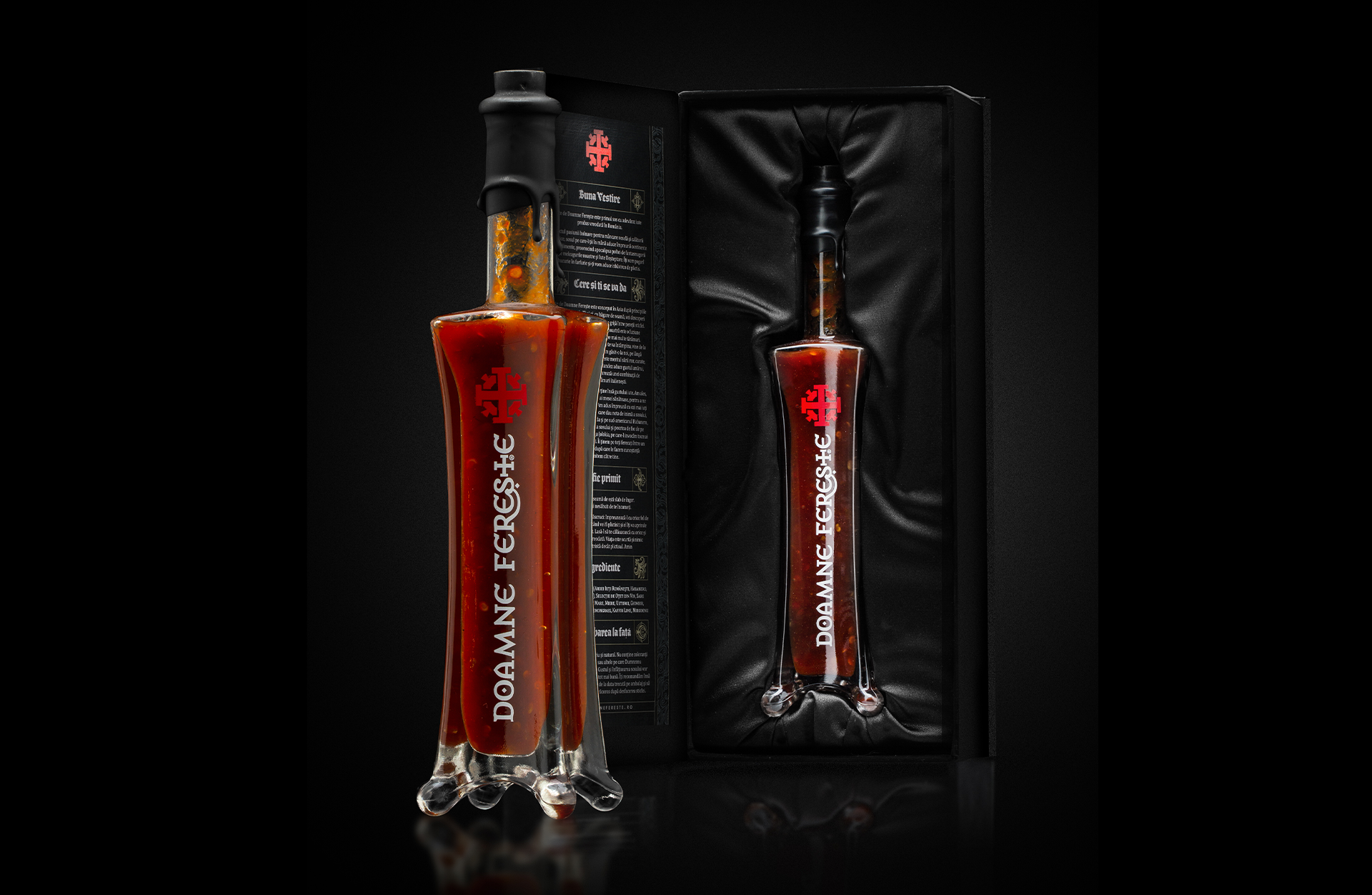 It’s important to mention the creative and marketing force behind the project. Before Doamne Fereste, Ioan Dan Niculescu and I were managing Argo together, a branding and advertising agency. In our portfolio, we have various types of projects, among them are a great number from the food industry. Together with the support of an amazing team, the experience and insight from previous projects, our passion for entrepreneurship and great visual communication, we successfully launched the new brand on the market.

Until Doamne Fereste became the first fusion hot sauce in Romania, there wasn’t much competition in this segment of the market. It was the first Romanian brand to focus on spiciness, both with its product and its advertising techniques. The brand communicates with courage, originality and a dark but smart sense of humor, along with the fact that the products are made with great dedication, testing and a “homemade” feeling, one that the Romanian audience always appreciates.

I think it goes without saying that the name made it a bit challenging to break into the Romanian food market. For example, when we wanted to register the brand in Romania, we got turned down three times because the label had a cross on it. So, the brand had to be trademarked at the European Union level.

Doamne Fereste’s visual identity and package tells a different story every time. The fusion concept found in the recipe was transformed into visual representations of the cultures it illustrates. For example, the Aztec edition of the mustard cream contains a synthesis of symbols and embellishments found in the Aztec culture. On the other hand, the Hindu edition represents a summary of both gustatory and visual elements regarding the Hindu culture.

The mustard jar has become a statement of the brand in itself, with the cube shape being a continuation of the square-ish logo, alongside the cultural elements embossed on the labels of each edition.

Ironically maybe, I’m not much of a cook myself, but I like to experiment, research and learn. I love Thai cuisine. I’m impressed by Mexican as well. But my taste buds have been won over by Sri Lankan foods. I always look forward to getting inspired by new parts of the world so I can bring home new flavors within the unique Doamne Fereste brand values and taste principles. My goal is to keep pushing the boundaries of fusion and spiciness, even beyond sauces and mustards.

Doamne Fereste is about breaking stereotypes, mixing the new with the traditional under the same lid. It’s about going beyond the comfort zone and into sense-awakening journeys. It’s the result of a culinary education gathered from many parts of the world. But above all, it’s about refined taste, balance and carefully orchestrated surprises.

I definitely went outside my comfort zone in this video interview, but it turned out great!